Solidarity in Practice:
Moral Protest and the US Security State

Cross-border solidarity has captured the interest and imagination of scholars, activists and a range of political actors in such contested areas as the US-Mexico border and Guantanamo Bay. This research examines how justice-seeking solidarity drives activist communities contesting US torture, militarism and immigration policies. Through compelling and fresh ethnographic accounts, the book follows these activists as they engage in unusual and high risk forms of activism (fasting, pilgrimage, civil disobedience) and explores their ideas of solidarity and witnessing, central to how these activists explain their activities. My research adds to our understanding of solidarity activism under new global arrangements, and illuminates the features of movement activity that deepen activists’ commitment by helping their lives feel more humane, just and meaningful. Based on participant observation, interviews, surveys and hundreds of courtroom statements, Solidarity in Practice develops a new theorization of solidarity that will take a central place in social movement studies.

Russo’s book is gripping, timely, and ethnographically rich. In addition to making a solid contribution to the social movement literature, the comparative and ethnographic nature of her book serves scholars, students, ethnographers, activists, and movement groups. This is no small task, and Russo should be praised for the accessibility of her research.’ Jane Schuchert Walsh, American Journal of Sociology

… this book provides a great read in troubling times for those interested in social movements, politics, high-risk activism, or social solidarity. It will appeal to students as well as seasoned scholars in these fields.’ Bernadette Nadya Jaworsky, Contemporary Sociology

‘Solidarity in Practice would serve well for a variety of audiences, from social movement scholars seeking to reimagine how we define success to instructors introducing graduate students to transnational social movements.’ Jessie K. Finch, Mobilization

Russo (Colgate) draws on observant participation, interviews, and documents to describe three organizations involved in what she calls ‘solidarity witness’, efforts to call attention to a perceived moral wrong by acts of physical resistance … She asks why people chose to do these things, why they persist with little hope of changing policies, and what these actions tell us about theories of contentious politics, given the disproportion of costs to rewards. Her rich analysis poses important theoretical questions about the theory of social movements while promoting a different form of activism. Summing Up: Recommended. Upper-division undergraduates through faculty.’ Choice

Chandra Russo shows how activists use prayer, pilgrimages, fasting, and time in jail to express themselves politically. Their witness, through sacrifice, dramatizes important issues and deepens the activist commitment to change. Solidarity in Practice is bold and gripping, and particularly timely.
-David S. Meyer, Professor of Sociology and Political Science, University of California, Irvine and author of The Politics of Protest: Social Movements in America.

In this carefully researched, beautifully written, and persuasively argued book, Chandra Russo explores the motivations, achievements, and shortcomings of networks of solidarity. Solidarity in Practice is a tour de force of social movement scholarship, a book that exposes the limits of conventional and traditional forms of social protest, while advancing and analyzing the new forms that are emerging out of the wrenching contradictions of our time.
-George Lipsitz, author of The Possessive Investment in Whiteness

Solidarity in Practice is a model of politically and ethically engaged scholarship. Vividly tracing the practices of “solidarity witness,” Russo challenges narrow definitions of the political and shows how activists use ritual and embodiment to create a sense of emotional connection to migrants, prisoners at Guantanamo, and victims of torture. Packed with compelling stories of activists’ experiences, the book paints a rich picture of a central vein of American progressive politics. At a moment when repressive action by the U.S. is growing, Russo’s timely analysis is crucial for all who hope to understand the wide range of forms that resistance can take.
-Nancy Whittier, author of Frenemies: Feminists, Conservative, and Sexual Violence

Chandra Russo’s Solidarity in Practice is a triumph of the head and the heart, the intellect and moral passion. Combining her role as an ‘observing participant’ in the protest groups she studies with her prodigious gifts as a sociological theorist, Russo conveys the logic, spirit, and rugged determination of activists resisting new formations of state violence. Her central term — solidarity witness — captures both the power and limits of this activism, while illuminating the great moral conflicts of our troubled times.
-Jeremy Varon, Professor of History, The New School

In Solidarity in Practice, Chandra Russo explores the practice of solidarity witness in movements dealing with border justice, torture, and human rights abuses.  In a rich exploration of ritual protest, fasting, pilgrimages, and civil disobedience, Russo captures the power of such embodied resistance. More importantly, she offers a provocative reflection on potential problems in this style of activism, particularly regarding issues of privilege and inclusion.
-Sharon Erickson Nepstad, Distinguished Professor of Sociology, University of New Mexico

Whether Democrats like Barack Obama or Republicans like Donald J. Trump are President, the United States government carries out atrocities inside its borders and, especially, around the world. Yet few Americans are aware of what their government does every day in their name. Read this fascinating book to find out how brave protestors are trying to change that ignorance.
-James M. Jasper, Author of The Art of Moral Protest 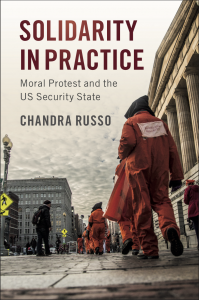